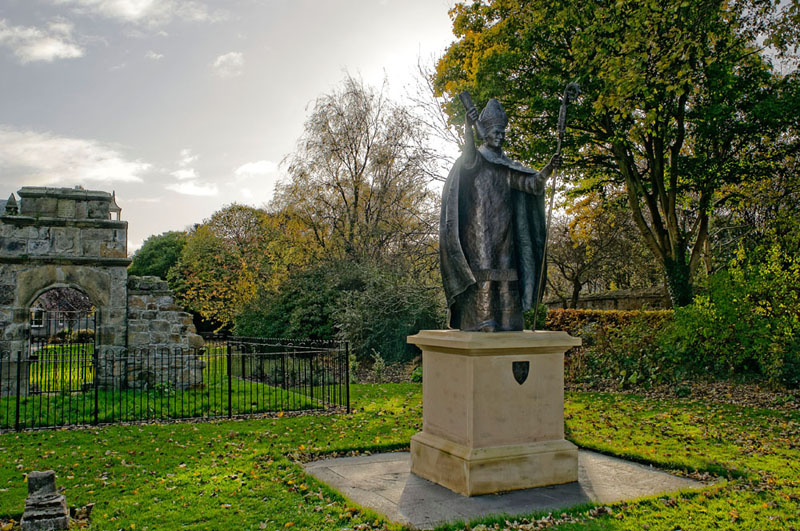 The Strathmartine Trust contributed to the 600th anniversary of the founding of the University of St Andrews by leading a project and raising the funds to commission a statue of the founder, Bishop Henry Wardlaw. The statue was sculpted by David Annand, from Kilmany, and was unveiled on June 30th 2013 by the Chancellor of the University, Sir Menzies Campbell. It represents Bishop Wardlaw as he might have appeared in February 1414 when the papal bull arrived in St Andrews from Peniscola in Spain, where the anti-pope, Benedict XIII, was in residence.

The triumphant bishop is holding the bull in his right hand and his crozier in his left hand. He is wearing a cope and the border of the cope has been decorated with panels of saints, and the particular images of saints were copied from the Arts Faculty mace which dates from the university foundation. Down both sides can be seen St Leonard, St Andrew, St John the Baptist, St Michael and at the top (on his shoulder), the Virgin Mary and child.

On the plinth is a bronze plaque of Wardlaw’s coat-of-arms, with his Episcopal dates and the Latin tag FUNDATOR LOCI (“Founder of this Place”). This is taken from a stone in the cathedral museum where it is carved alongside Wardlaw’s initials and his shield with Episcopal mitre and stole. This must relate to the foundation of the University, perhaps particularly the Pedagogy which he founded in 1419. The plinth was made by the local firm of Watsons, whose young craftsman carved the inscription. The statue and coat-of-arms were cast at Powderhall Foundry, Edinburgh.

The statue is located on the lawn in St. Mary’s Quadrangle, beside the reconstructed gateway, which has been moved to its present location, but may be from the earliest site of the college of St John, which was replaced by a library in 1612 (now Parliament Hall). Bishop Wardlaw looks north towards the site of the original Pedagogy which was replaced by St Mary’s College in 1538.

This project to erect a visual commemoration of the University’s Founder was achieved with the support of many generous donations from the University, local Trusts, alumni and friends.

Strathmartine Trustees believe that this commemoration of Bishop Wardlaw would have been approved by Ronald Cant, whose knowledge of the early history of the University was profound, as can be appreciated from his own ‘Short History of the University of St Andrews’ (1946, revised ed. 1992 and republished 2002.* (*Available from the Strathmartine Centre office, price £14.)