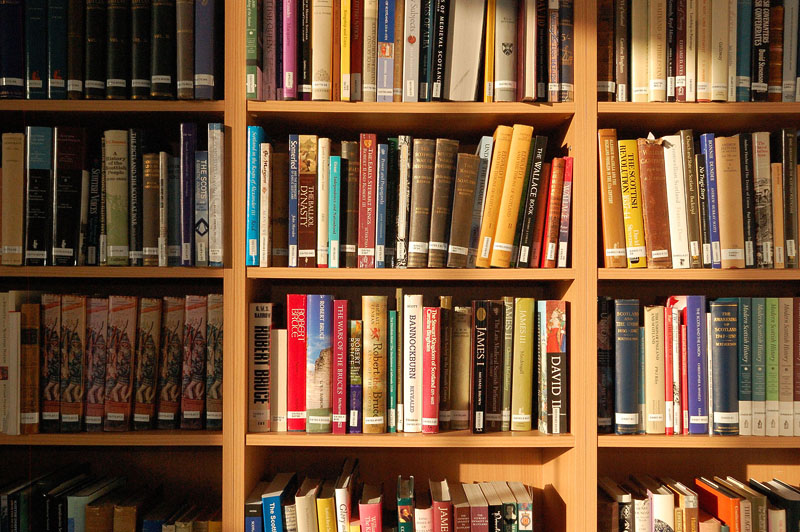 The Strathmartine Centre Library, which holds in excess of 5,000 items, began life as the private collection of Ronald Cant and his family, and has grown considerably since the opening of the Centre, with the addition of numerous private donations from the collections of other scholars, including the late Dr Marjorie Ogilvie Anderson, Professor D E R Watt, Dr Annette Smith, Dr D M Finlayson, Ian Keillar, Professor A.A.M. Duncan and several smaller donations. It covers most aspects of Scottish History, not only political but economic, social and ecclesiastical, and there are significant holdings of general British and Scandinavian history. Scottish (and to some extent Scandinavian) antiquities and architecture are also covered.

Holdings of journals, periodicals and serials include complete sets of the ‘Scottish Historical Review’, the ‘Innes Review’, the ‘Proceedings of the Society of Antiquaries of Scotland’, and the Stair Society, a substantial run of the ‘Scots Magazine’ and some smaller sets. We also hold the archive set of the ‘Scottish History Society’. There are numerous volumes from the nineteenth century publishing clubs. Among the pamphlets, guides to historic buildings in Scotland and elsewhere are prominent. There is also a complete set of the Seventh Series Ordnance Survey 1″= 1 mile maps of Scotland.

A computer in the Library provides access to a catalogue of its holdings (not available online) and to a substantial collection of electronic books.

As the Library’s resources for the purchase of books and periodicals are limited, the centre would be grateful for gifts of relevant works in the subject areas mentioned, especially those of recent date.